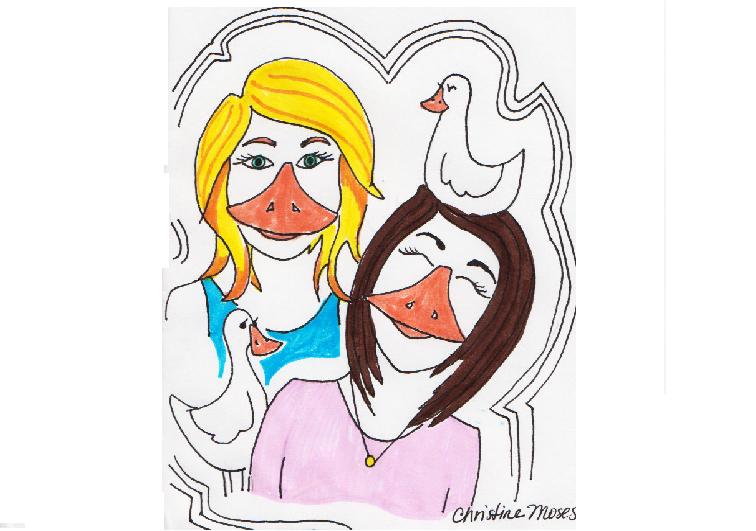 Teens seem to take fads to the extreme. Snapbacks, trolling, Sperry’s, YOLO and the Duck Face have become a way of life. As you scroll through your Facebook and Twitter feeds, it’s filled with girls, and guys, talking about how much fun they had this weekend ‘cause YOLO, and pictures of girls trying to impersonate Donald Duck.

There’s nothing I love more than waking up and unlocking my phone to a bunch of ducks. I don’t know where all my friends went; they’ve obviously been replaced by “Mickey Mouse’s Club House.” I’m clueless as to why girls these days don’t have the respect to just smile. The point of the Duck Face… wait, what is it? If you’re trying to look attractive, it’s not working. Everyone is beautiful, and girls should be showing their true beauty, not their inner feathered friend.

What is the duck face you ask? According to Urban Dictionary, the duck face is “A facial expression utilized by attention-seeking teenage girls in which they push their lips outward and upward to give the appearance of large, pouty lips.” Girls use the duck face in hopes to look better than they actually are, when in reality it makes them look appalling.

The social phenomenon of the Duck Face has caught the attention of many. The NY Times has even acknowledged the epidemic, and there are billions of Duck Face haters for obvious reasons. Sarah Miller, NY Times journalist, writes, “There’s an anti-duck Facebook page, with over 16,000 likes, and a Twitter feed, with over 1,500 followers.”

The level of hatred for the Duck Face has gone so far as making a sport out of the poor insecure girls.  It’s fun, easy and harmless. You don’t even need a gun, even though you probably want one. When you see one of the many unfortunate ugly ducklings on your computer screen, you just comment “bang.” It’s the new and improved duck hunting.  Those of us who are sick of the pursed lips have really targeted our inner Elmer Fudd in hopes to end the ever growing population of quackers.

The unfortunate trends seem to catch on too quickly, while others have been around for too long. According to the Meme Database, the Duck Face originated in May of 2006 when MySpace was still a popular social networking website, not the dying black hole we all know it is. The Duck Face is dubbed as the MySpace Face because of its origin. So why the big explosion now? MySpace is dead and we all hope, for the sake of humanity, the Duck Face will soon follow.

Girls on social media networks have subjected themselves to promiscuous and bird-like poses for their pictures instead of actually looking their best and flashing those pearly whites. The media has given young women the idea that posting seductive or exposing images online is acceptable, when it’s not. Once you upload that “fun” and “innocent” picture of you in your bikini, Duck Facing of course, it stays on the Internet forever. Girls always say they “don’t care what people think of them,” but really, they do. Girls are insecure and vulnerable and so they do what’s mainstream. Unfortunately, mainstream has become inappropriate and imprudent.

I long for the day where the only ducks I see are swimming freely in ponds and I get to see my friends’ beautiful smiles once again. Ladies, unless you’re Derek Zoolander, leave the pouty lips at home.