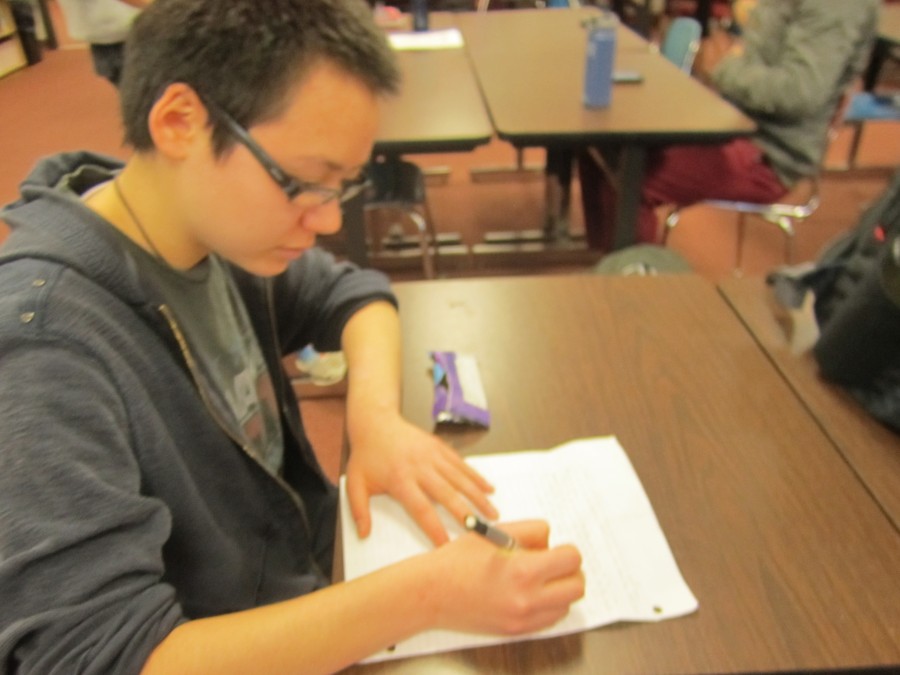 November is a good month. Fall draws to a close, but it’s not quite winter yet. The autumn colors really start to take over the landscape, and the sky turns grey and cold to contrast the warm oranges and browns that litter the streets. It may not be perfect weather for everyone, but it certainly seems to be a writer’s most comfortable atmosphere. If cliché poems and Instagram pictures don’t support that claim enough, then the month itself speaks for something, labeled National Novel Writing Month, or NaNoWriMo for short.

Actually, NaNoWriMo is an annual contest, held from November 1 to the 30. In the stretch of a month, contestants are challenged to write a 50,000 word novel. That’s close to 2,000 words a night to keep up. For some, that seems impossible. But many writers compete against the time limit and come out on top.

So why am I talking about it January? Seems a little early, no?

Ashland High School is full of avid writers. Our students have won awards and gone on to be published authors and poets. Even before graduation, AHS has a number of incredible writers, many of whom participate in NaNoWriMo and other writing contests.

Take, for example, Em Loewenstein, a student at Ashland High, who last year completed NaNoWriMo with over twice the average goal. “In the story, I reached 100,020 words,” they said, “but I was continuing a thing and my actual word count for the month was probably closer to 80k.”

Loewenstein’s novel, a Dystopian Sci-Fi story with the working title The Obenauer Project, is their third attempt at National Novel Writing Month, and their fourth completed novel. “I was first introduced to it in 8th grade, and I’ve been participating ever since… I didn’t get anywhere near 50k my first time.” They instead set a goal of 27,000 words for themself and stuck to that. Most of Loewenstein’s writing has also been science fiction and dystopian, although they have written fantasy and modern-day action/adventure as well.

Asked about The Obenauer Project, Lowenstein says, “It’s about a man trying to survive in the middle of a civil war. After his brother dies, he eventually gets involved and ends the war, only to find that there’s no real difference between him and the ‘villain’ beyond their situations. They think the same way. There are a lot of questionable morals in that one.” Loewenstein admits that they hope to publish novels some day, but that they feel they have room to improve before they are fully ready to.

For now, Loewenstein writes because they enjoy writing. Their favorite part of the writing process is creating the characters and getting to know them as real people, they say. Loewenstein’s favorite of their characters they have created so far is Amadeus from their most recent project, because of his depth. He is, Loewenstein explains, not a perfect person, and has his flaws, but this is exactly what makes him an enjoyable character to write, and hopefully to read as well.

Our depth and flaws are what make us real. These are lessons that writing teaches us about our characters, ourselves and the people we know. This is why writing, like all forms of art, is so important. National Novel Writing Month is an enormous challenge, but it is also enormously rewarding. It’s a race against time and a test of creativity and discipline, but anybody can do it. Everybody, at some point in their life, might benefit from trying. And Loewenstein’s advice? “NaNoWriMo is about doing the thing that seems impossible – writing a novel in only 30 days. For many new writers, it’s intimidating. It seems like it will never happen. And yet thousands of people succeed every year. I mean, look at me. I’m a master at procrastinating, and I can do it. I realize this is going to sound really cliché, but my best advice is to really believe you can do it and trust the story to take you places. And also obtain caffeine. Lots and lots of caffeine.”

* Em Loewenstein goes by gender-neutral pronouns. In this article, I referred to them using “they/them/their.” For more information on alternative pronouns, check out McBennett’s article here.