The Most Important Grammar Rule Your Teacher Never Taught You 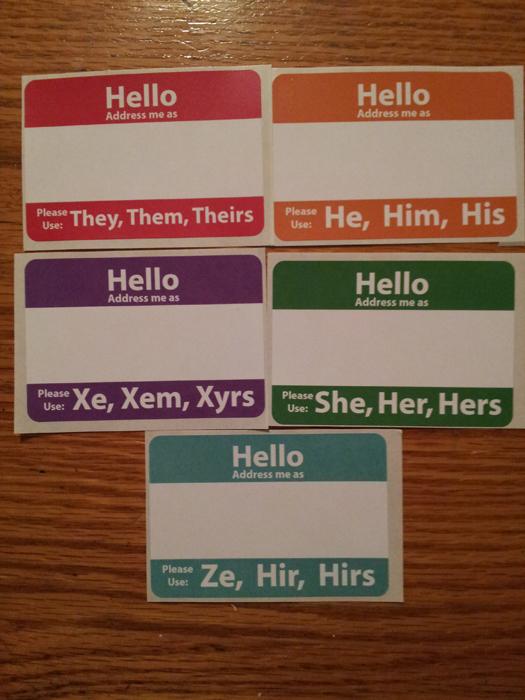 Your English teacher knows a lot about grammar that you probably don’t. But if there is one subject they have most likely been completely wrong about, it’s personal pronouns.

If you don’t remember, a pronoun is a part of speech that replaces or refers to a noun. For instance, we use “it” on a regular basis to refer to objects, as well as “he” and “she” and “they” to refer to people. And then of course there are several other forms these can take depending on how they’re being used, like him, his and himself. These are pronouns. And that is as far as your teacher ever got.

But now we are going to talk about gender, sex and what grammar has to do with being respectful.

Sex and gender are not the same thing. I know, it can be weird to think about at first, since from birth we have heard them used synonymously. Some paperwork asks for your sex, some asks gender. However, they really aren’t the same. A person’s sex is the biological fact of whether they have XX chromosomes or XY. A person’s gender, on the other hand, is whether they are a boy or a girl (or neither, but I’ll get to that later). But wait, isn’t that the same? Isn’t having XY chromosomes the same as being a boy?

They correlate for most people, but not always. When a person’s gender is different from their biological sex, that is called being transgender. So for example if a baby born with XY chromosomes grows up to discover that she really likes to wear girl’s clothing, or is uncomfortable with her male body, then she would be a transgender girl.

Now this is where pronouns and all that grammar stuff becomes very important. Notice in the previous paragraph the way I said “she” prefers to wear girl’s clothing. The pronouns used to refer to someone should be based solely upon their gender, not their sex. If you ever meet an individual who tells you they would like to be referred to by certain pronouns, no matter what sex you think they appear to be, their preferred pronouns are 100% the only ones you should use. And if they don’t tell you right away what they want to be called, and you are uncertain, ask. No, it is not rude. Just say “what are your preferred pronouns?” It might seem like a question you never thought you’d ask someone, but it does a lot to make them feel respected and welcome.

So, if you’ve got all that, let’s move on to even more interesting things. (Though we are still talking about grammar, sorry.) Language can change, and new words get invented all the time. Right now, new pronouns are being tried out, in an attempt to find one that will catch on that can be used for people whose gender identity fits neither male nor female. Right now, “they” seems to be the most commonly used. But among LGBTQ communities, new words are being invented, such as “xe” “ne” “ey” and “ze.” Some have also adopted the gender neutral Chinese pronoun “ta.” Each of these has an entire set of possessive and objective pronouns to go with it. This is where there is trouble in making one commonly used. It takes practice to get a hang of new grammar, and not everyone wants to learn each new set of pronouns.

Many English teachers will claim that there are no singular pronouns other than “he” and “she” but next time you can prove them wrong. Grammar sometimes has to change with the times, and following old rules isn’t nearly as important as being respectful.