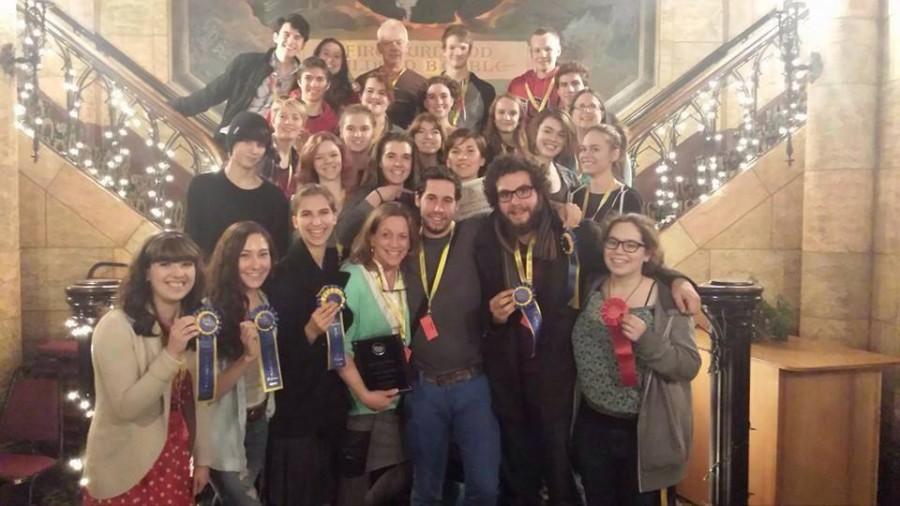 On Wednesday, April 2, 32 Ashland High School drama students left for Salem to attend a state-wide thespian conference. Students who qualified at regional competitions went to State to compete in categories such as acting, singing and design.

Five students from Ashland High School won, and were selected to showcase. Joe and Noah Yaconelli won in duo comedic with a scene from The Drowsy Chaperone, Elena Toppo in solo acting with monologues from Two Gentlemen Of Verona and View From A Bridge, and Amelia Mejia and Alyssa Monning won duo musical with the song Freedom. Some students entered design competitions as well, such as costume, set and makeup design. Another Ashland student, Jennifer Conrard, won in makeup design.

At the conference, which was attended by about 1,200 thespians from around Oregon, there were several events to go to. There were two dances, each with a different theme, and three shows to watch. One was called Holmes For The Holidays, a spoofy Sherlock Holmes murder mystery/comedy. They also showed Hamlet, and another comedy called Rumors. Throughout each day, there were one-acts being performed, and a huge variety of workshops.

The final highlight for Ashland was at the end of the conference when they announced several schools that had been named honor troupes. These are exemplary thespian troupes that do a certain amount of community outreach and events, and Ashland High was one of them.