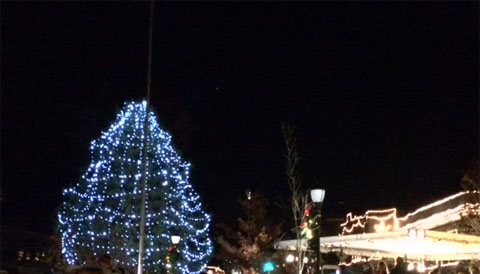 On November 28, the day after Thanksgiving, Santa rode down East Main Street with Mrs. Claus by his side as the city of Ashland enjoyed the annual Festival of Lights. The parade and surrounding events are put on by the Ashland Chamber of Commerce to support local businesses and help people “find their holiday spirit.”

For 22 straight years the Festival of Lights has signified the start of the holiday season in Ashland. Thousands of people came out to see the parade which culminated with Santa standing on a balcony overlooking the plaza. 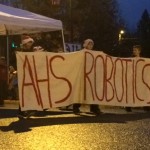 Santa began the countdown at ten and the lights dimmed. As the crowd said zero, the town lit up with lights on every building and every trees throughout the downtown area.

The events began at 1pm that afternoon with performances in the plaza. A variety local music and dance groups took the stage for the hours preceding the 5 o’clock parade. The short parade included entries ranging from local businesses to religious groups. The Ashland High School Robotics Club was one of the groups that participated in the parade. They carried a banner that read AHS Robotics in front as the rest of the team members carried a pop up tent over last year’s robot.

The undisputed stars of the parade were Mr. and Mrs. Claus. The two sat in a sleigh pulled by a truck with Rudolph sitting in the back seat as they waved to smiling children. After the parade, carols were sung and there was a chance for kids to meet Santa and Mrs Claus. There can be no doubt that the holiday season is upon us here in Ashland.