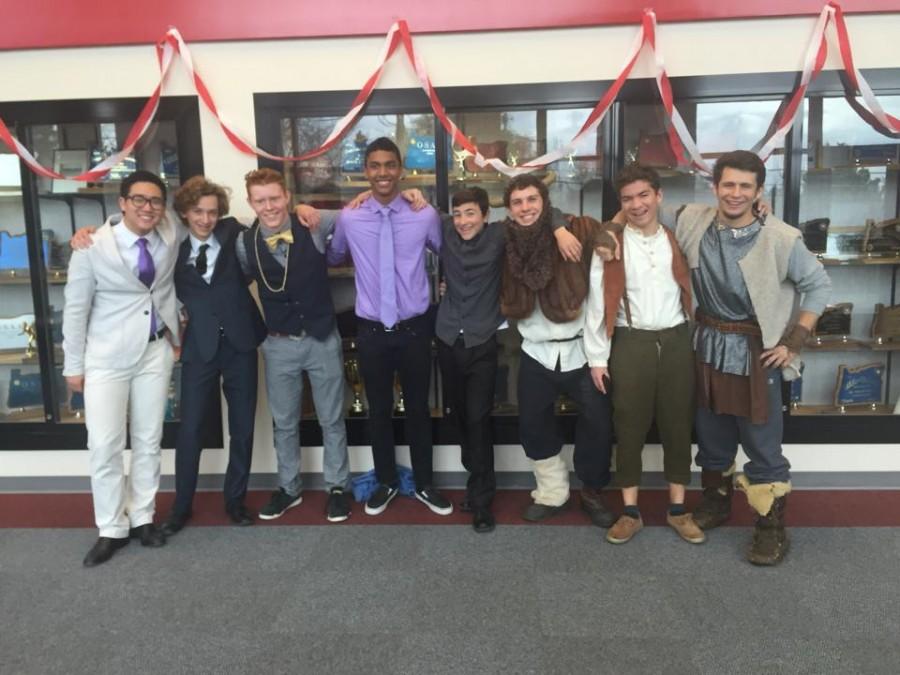 Mr. Grizz, a satirical pageant mocking all beauty pageants, will take place on Friday, April 17 at 7:00 PM. The pageant is comprised of 2 contestants from each class for a total of 8 Ashland High School men. Participation is not just for fun: all proceeds go to the Children’s Miracle Network (CMN).

For those who don’t know, Mr.Grizz is boiled down to the mere quintessence of a male beauty pageant. Contestants are tasked with showcasing their talents, making the infamous, “Day in the Life” videos and performing a group dance. The Mr. Grizz guys have been practicing since mid-Winter preparing for the event.

Bendat describes Friday night’s appearance as a “Humorous show performed specifically by guys”. He was offered the opportunity mid December as a member of leadership and accepted the offer at the opportunity to have ASB Co-President, Jackson Richmond as his mentor. Bendat is nervous for the pageant mainly because he will be learning his talent (ballet), in one day. “I’ve accepted that I’m going to make an idiot out of myself and that’s okay with me.”

Cooper draws his inspiration for performing from his mom. While he has many reasons for this, Cooper will disclose them at the pageant. Although his mom is his role model, his main inspiration for competing is the cause behind the fun, “It’s a really good experience, and 100% of proceeds will go to charity. The more money that’s in my jar the happier I am.”

Barnes was chosen to participate by popular demand, being told by many peers that he should take the opportunity offered to him by leadership. He ended up taking the same chance his uncle had 20 years ago. Barnes’ talent is his artful photography and videography. Barnes has been having a grand time with the preparations and fundraising, but through the stress and chaos he says, “it is completely worth it, it’s fun to look at the comedy but listen to the deeper message.” This deeper message is the cause behind Mr. Grizz, the Children’s Miracle Network. Wherever he goes in life and whatever happens he will know that this is a chapter in his life where he is doing good.

Unlike varsity wrestler Barnes, Scarpaci doesn’t crush people with his body but rather with his words. Scarpaci is a member of the Ashland High School Speech and Debate team, participating in Parliamentary debate. Scarpaci decided to join Mr. Grizz because he wanted to have a new experience. His motivation behind joining was to get donations for the Children’s Miracle Network. Scarpaci and Barnes both admit to not having much stage talent, but Scarpaci informs us his talent will remain a secret and the only thing he can disclose is that it will be, “Spicy.”

Both Dow and Lee expressed that they are motivated by the Children’s Miracle Network and the opportunity to help.

It takes an abundance of motivation to continue to work so hard for the time consuming pageant. Dow’s motivation comes from the great cause behind the project. “The level of intensity and what it really takes to help these babies” is what drives him. Lee has a similar opinion about what really matters in this competition. “Kids are fighting these diseases right now and we can actually help them,” said Lee.

Coster and Lehrburger are both excited for the opportunity to help the kids in the Children’s Miracle Network.

Coster, well known varsity soccer player, has raised $250 for the CMN by asking local businesses for donations and through the Mr. Grizz carwash. He is the drummer for Chapter II, a local band. For the talent portion of the show, he will be demonstrating his drumming prowess gleaned from the entirety of his life. When asked what he was most looking forward to with the show, Coster said, “Ballin.” Coster’s motivation for participating in Mr. Grizz comes from his low tolerance for suffering among children, “I can’t stand seeing kids of any age suffer and it actually hurts me to see them have to go through such terrible things. I will do whatever I can to help make their life a tiny bit better.”

Lehrburger, co-captain of the varsity soccer team, is excited to follow in his brother’s footsteps. As a freshman, his twin Gabe Lehrburger was chosen to participate in Mr. Grizz and now the other half of the brotherhood is taking on the fun. Raising $250, he is most excited for the group dance portion of the show. As his talent, he and his brother are performing a stand-up comedy routine about being twins.

Every year, Mr. Grizz gets more and more bizarre. The excitement surrounding the pageant grows every year, and the tickets are set to sell out. Mr. Grizz will take place on April 17 at the Ashland High School Theater. It is sure to be a heartwarming and hilarious experience, so don’t miss out on the chance to donate to the CMN and have a great time! Tickets are for sale on the quad at lunch and after school for $7 or at the door for $9.

Check out a video preview of the action here.