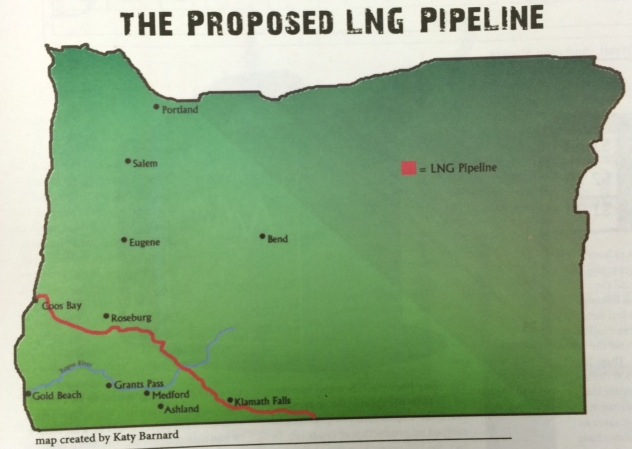 A controversial environmental issue is the proposed LNG (Liquefied Natural Gas) pipeline that would run through the Rogue Valley, known as the Jordan Cove Project. Liquefied natural gas is a fossil fuel. It liquefies when cooled to -261 degrees Fahrenheit at liquefaction plants, which is almost as cold as Saturn’s surface. It is shipped once it is in liquid form.

The Jordan Cove Project is a proposed Pacific Connector pipeline that would transport a billion cubic feet of fracked gas a day from Canada and the Rockies to the coast. From there, it would then be shipped to Asia. Ideally, the pipeline would help meet the growing demand for natural gas, aid the Coos County economy and create many jobs. It is designed to be safe by conforming to strict safety standards to protect both people and the environment.

The pipeline would be 235 miles long, nearly the distance from Ashland to Portland and 36 inches in
diameter, crossing nearly 400 waterways and lying 76 feet below the Rogue River.

Much of the Jordan Cove Project’s support is generated by the prospect of new job opportunities. However, its negative impacts are undeniable.

The proposed pipeline and its terminals could become the contributing factor in greenhouse
gas produced by Oregon, contributing to global warming. It would increase fracking (drilling to release natural gas) in the country, which would contaminate drinking water.

The subsequent heat given off by the pipeline would negatively impact aquatic life, and the digging
would erode waterways. The creation of the pipeline’s export terminal on the coast would destroy important aquatic habitats in the area by digging up more than four million cubic yards in the North Spit.

It could also spell disasters for forests, cutting a 95-foot wide path through Southern Oregon. 153 miles of the pipeline would be through private property, including land that would normally be used for farming. The resulting air pollution would be severe as well, with two million metric tons of CO2 emissions per year. Most of these emissions would come from the purification of the natural gases and the extreme amounts of energy needed to supercool the gas.

The pipeline could also be a safety hazard. Pipelines have exploded before, killing people and
destroying homes, so the fear is not unprecedented; there has been more than 1,400 pipeline accidents in the last four years alone. The resulting fire could also harm forests and their wildlife.

The Federal Energy Regulatory Commission (FERC) released a draft Environmental Impact Statement which claims that the harmful effects of the pipeline would be easily reduced by implementing measures to protect the terminals from tsunamis and earthquakes, addressing environmental hazards along the path of the pipe and compensating for the loss of important wetlands. The public can file comments on the draft EIS before February 14th.

Students who want to get involved are encouraged to contact Sarah Westover at [email protected], or go to rogueriverkeeper.org for more information.