1)      Select snow of the proper consistency – You want snow that is wet enough to compact, but not that is so wet that it quickly congeals into ice.

2)      Gather about 16 oz of snow in your hand – while this might seem like a large amount, the compacting will remove much of the excess volume. Keep in mind that is better to err on the side of too much snow, as any excess amount can be later shaved away. 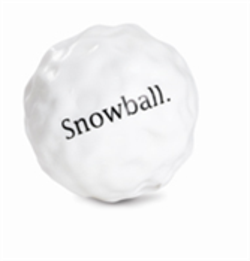 a rotationally symmetric ellipsoid having a polar axis shorter than the diameter of the equatorial circle whose plane bisects it). The minor axis should be approximately 6 cm in length, while the major axis should be 5.5 cm. We have found that the oblate spheroid has a positive interaction with the earth’s gravity due to the similarities in shape between the two.

4)      Throw snowball – When throwing maintain a counterclockwise spin on the ball, in order to cause an expansion of the surface area and hence generate an increased splash radius.