More Than a Mass Shooting

Death is a difficult notion for the human to conceptualize. Whether viewed as the “simple termination of life” or as a doorway from this temporal state to the next, it is an exceptionally permanent and profound thing to take from someone their life.

At 4 PM on Saturday, October 26th, I got a text message from a fellow student at Ashland High asking if I wanted to join them at a mourner’s Kaddish regarding the massacre that happened in Pittsburgh earlier that morning. Not being Jewish myself, I Googled “Kaddish,” learning that it is an ancient Jewish prayer which concludes with a call for universal peace.

I walked down Pioneer Street five minutes late in all black to find a cluster of about ten people on the OSF bricks. Upon reaching my friend, I learned that I had missed the prayer.

Even though the prayer had already happened, we decided to walk through Lithia Park to process further. Tears escaped my friend’s eyes while we walked. We observed the children on the playground and the tourists in their hats, and we observed ourselves. It seemed to us that the sun should have been hidden behind clouds and that nobody should have been laughing. I can still feel the heaviness of my heart as I attempted to turn sympathy to empathy, realizing the affect that a massacre like this has on so many people. Without the discussion that day, I never would have been aware that what happened at the Tree of Life Synagogue in Pennsylvania was anything more than “another mass shooting.”

We need give our motivation to the fight against hate crimes like the one committed on October 27, 2018. ”

“My heart is torn between grief and rage. When will they stop killing us?” demands Ari Albertson, a former Ashland High student. For many, the event is just a continuation of the antisemitism started in the late 1870s when Wilhelm Marr published a book called Victory of Jewry over Germandom. That fear and subsequent terrorism has yet to end. Right when my friend began feeling connected to this identity, to which they converted mere months ago, and right when they began believing that maybe the world was making progress, their entire being felt as if it was crashing to the ground, this prior hope and happiness disappearing with it.

The words that the shooter spoke before he opened fire are not to be ignored. The disturbing phrase, “all Jews must die,” is no different from the many anti-Semitic and anti-Islamic views the shooter expressed frequently online.

“You can run away from governments, but not from hatred,” states Rabbi David Wolpe for TIME Magazine. He points out that Jews are a durable, long-lasting people. Jews, he says, will be targeted no matter what. They are the Other, the unknown. Wolpe says that “today all over the world, Jews will gather and pray to the God who has repeatedly tested them, demonstrating yet again that despite the tragedy of yesterday and the trials of tomorrow, we will endure.”

Let us, Ashland High School students, the generation of the future, join them in mourning and then in rage. Let us never stop talking. Let us hold hands, signs and banners while we march for peace. Let us make it known that we are allies, that we are here and that we are available and committed to making peace. Let us discuss, argue and explain. We need give our motivation to the fight against hate crimes like the one committed on October 27, 2018.

I feel humanity crumble in the palms of my hands, and I wonder what the gunshot must have sounded like as it bounced between the Synagogue walls

I wonder what the moments between “All Jews must die!” and the first body hitting the ground must have looked like

I wonder if we’ll ever know the pain

The stillness of the aftermath

I wonder if I will ever feel safe in this body

When will we decide to preach peace and teach love?

When will the news of 11 deaths hit us as hard as the bullet hit the innocent victims?

We deserve to live.

I feel humanity crumble in the palms of my hands, and I wonder if you feel it, too. 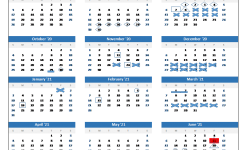 The Effects of Christmas Consumerism

It’s 8:17 in the morning. I pull into the staff lot and see almost half of the spots sitting there untaken. The two front rows of the Linco...

Christmas isn’t my family’s favorite holiday. I don’t think we have one. Halloween is fun, but even then, we’re not very festive p...